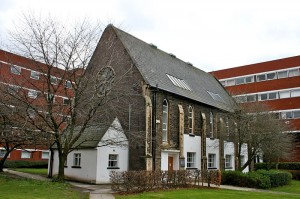 Stephen Joseph is a name ingrained in the minds of Manchester’s drama students. The Stephen Joseph studio, named in his honour, is one of the Drama departments most frequented rehearsal spots. The studio itself was originally built as a German Protestant church, before being occupied by the university in 1949 and eventually taken over by the Drama department. However, about the man himself, students generally know very little. Joseph was born in 1921 and his life, whilst relatively short, encompassed a lot. He was the youngest student to attend the prestigious Central School of Speech and Drama. He was also something of a war hero, twice decorated for his bravery. Yet it was on the stage where his heart truly lay.

Determined not to be in the shadows of his famous parents, actress Hermione Gingold and publisher Michael Joseph, he set out to make a name for himself in the theatrical world. Joseph was very successful, being often considered the pioneer of the exciting style of performance known as ‘theatre-in-the-round’ in Britain. Having been inspired by what he saw in Broadway, he was determined to establish it across the pond. In Scarborough in 1955 he established the country’s first theatre-in-the-round company on the first floor of the Public Library. Joseph died young, at only 46, yet was able to achieve much in his relatively short lifetime. He was something of a maverick and was consistently passionate about innovation and experimentation in theatre. Joseph sourced new and controversial material and encouraged up-and-coming playwrights such as Alan Ayckbourn and Harold Pinter.

As a lecturer at Manchester, the University Drama department owes a lot to Stephen Joseph for its establishment and its original and exciting style that makes it so successful. He left us with this optimistic philosophy: “If, when mankind finally disintegrates, whoever created him has been stimulated and amused, mankind will have accomplished something.” These words speak of Joseph’s legacy, in rainy Manchester, as wit and optimist. Just as winter truly kicks in and deadlines loom, Joseph’s words, much like his theatre, provide a cheerful respite from the cold.