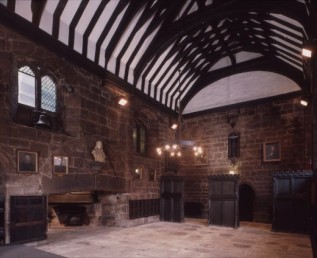 For our final excursion for the Historian, Alice and I made our way to Chetham’s to join the Friends of the library to see not its books but recent discoveries made about its objects, furniture and paintings. This visit was particularly poignant for me as I first visited Chetham’s last year for one of my first articles for the Historian, and so it is fitting that this should also be my last article for the magazine.

The tour began the best way tours should, with a glass of vino in the Baronial Hall. The library had been an accessible public space since it was altered from a College to a Library and Hospital in the 1650s, where the literate high and mighty visited read from its colossal textual collection, and the illiterate ‘dim wits’ came to view its cabinet of curios that were displayed in the Hall. Taxidermy, including an entire menacing alligator, had been hung from its walls, though now (only) stag heads crown the entrance wall.

The next room we visited was the warden’s room where the furniture symbolises the cumulative styles of various ages: the timber ceiling dated to the early fifteenth century is decorated with grotesque masks, and the Queen Anne walnut settee that rests on ball and claw feet and other chairs in the room date mostly from the eighteenth century. The refectory table against one wall upon which an oval shape is burnt into the wood was claimed to be the hoof print of the devil conjured by John Dee, Elizabeth I’s astrologer, alchemist and occultist, and warden of the Collegiate Church, now the Cathedral, from 1595.

From here we ascended a secret passageway to the first floor main library and the Reading Room. The walnut clock was given to Chetham’s in 1695 by Nicholas Clegg, a former pupil of Chetham’s school, and was made by Thomas Aynsworth of Westminster. Inset is a barometer, a later addition that was made by the esteemed instrument-maker John Patrick, reputedly the first barometer maker. Nowadays, it always pessimistically forebodes ‘rain’, though the clock, after restoration and recalibration, now works accurately to a few seconds gained or lost each month. Dominating the room is a central table surrounded by twenty-four Cromwellian type leather-backed chairs purchased in the 1650s. You might notice that the table is not flat, which is due to a broken beam in the room below. It is likely that the quirks observable in this room today were viewed by a succession of readers; a notable few include Benjamin Franklin, Charles Dickens, Karl Marx and Friedrich Engels.

In one corner of the room an unusual carved bookshelf, part of Humphrey Chetham’s chained libraries, was recently found to have unconventional origins. It was revealed earlier in the year to have been made out of a rare early sixteenth-century bed made for Bolton gentleman, Adam de Hulton. The royal bed was the central feature of the innermost sanctum of the state apartments and was regarded as an extension of the king’s divine body. As such, a Paradise Bed was made for Henry VII and Elizabeth of York to commemorate their wedding in 1485. It is beautifully carved and depicts Adam and Eve in likeness of the King and Queen surrounded by the fruits of paradise symbolise fertility.

Imitating the royal Paradise Bed, the Hulton’s Paradise Bed is decorated with intricate carvings of Adam and Eve and symbols of the Garden of Eden. For example, the fruit has religious connotations with the strawberry leaves representing the Trinity and the grapes symbolising the transubstantiation of Christ’s bloody during the Eucharist. A BBC 4 documentary on these findings is being produced for release later in the year.

William Hulton, one of the Library governors, donated the bed to Chetham’s in 1827 when it was remade into a bookshelf. Lucy Worsley’s series on The History of the Home has shown that the bed was enthusiastically surrendered to houseguests in the early modern era, and so it has been deduced that visitors to Hulton’s home such as Bonnie Prince Charlie would have slept in this bed-turned-bookshelf.

Furniture-maker George Shaw was inspired by medieval England and produced Paradise Beds and other furnishings in the medieval style, often passing off fakes as the real thing to unsuspecting dukes. Back on the ground floor and the final room in our tour, tables, chairs and cabinets are styled with symbols found on the Paradise Bed and the family crests of Henry VII and Elizabeth of York. The question remains as to whether these furnishings are medieval originals, possibly being the oldest royal chairs in existence, or whether they are successful fakes produced by the enterprising nineteenth-century furniture maker, Shaw.

Despite these recent discoveries made at Chetham’s, the mystery that engenders the library persists more than ever. Furniture has defining social, political, economic and cultural associations, and Chetham’s houses some of the oldest and most symbolically important decoration in Manchester, if not in the country. If the books aren’t enough to tempt you, surely its extensive furniture collection and various curios will be adequate motivation for your visit or revisit.

Write for our 35th issue on Fractured Nations! Now open for pitches and submissions. https://t.co/coHhLNMr2f

Come to te launch of Issue 34 of the Manchster Historian! Tomorrow (wednesday 11th) at 3pm, Ellen Wilkinson building A2.7

We’re launching our next issue! Drop by to get a copy and hear some fascinating talks from some of our contributors https://t.co/NBoGo5uflK

‘A second-class citizen for his skin, and a criminal for who he loved, Rustin’s activism for black civil rights put him in the line of fire at a time when being openly gay menat he was already a target, even within the civil rights movement.’

‘Hooks points out a white hegemony that exists throughout the art world and, in particular, art histories. The strong Afrocentric works of Kehinde Wiley and Akuniyli Crosby often counter this, however.’