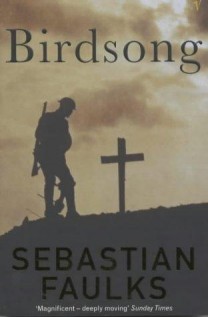 From the outset, Sebastian Faulks’s ‘Birdsong’ is a novel of parallels. Parallels between joyous youth and broken youth, love and hatred, peacetime and wartime, past and present.

We are introduced to Stephen Wraysford and follow his journey through War and Peace. Faulks’s intense imagery and narration provides the reader with a graphic insight into the true reality of war – extreme living conditions, fear and pain, as opposed to slanderous “glory of war” propaganda used to lull a generation away from their home to be slaughtered like cattle. A particular scene which grabs the reader using sensory imagery to describe the wounds of a mustard gas victim is particularly harrowing, transporting you to the war and leaving imagery in the mind long after you have finished the novel. Similarly, Faulks’s description of the infamous Somme is hauntingly beautiful and heart breaking at once, capturing a storm of emotions; religious despair, anger, pain, sorrow.
Faulks also touches on the effect war has on non-combatants, critically drawing upon the home front when Captain Weir returns home to a cold reception by the family he is fighting for. The condition of women and children is also explored by Faulks. An interesting aspect of the novel is the storyline of Stephen’s granddaughter, Elizabeth, set in the 70s. Determined not to let the memory of her grandfather die with him she pursues his life, in turn meeting one of Stephen’s soldier’s – a man ravaged by shell shock – in a retirement home. The treatment of this character and the lack of regard Elizabeth’s colleagues have for the past is often seen as a statement by Faulks: the sacrifices of those whom fought in the Great War should never be forgotten or devalued. Elizabeth’s storyline also provides hope to a story which mainly depicts despair, the birth of her son whom she names in accordance with a promise Stephen made to one of his fallen comrades and the prevalence of nature in her chapters indicate that there is always something greater than war, and human life itself, and life will continue.
Birdsong is a novel which perfectly captures the futility of war, the bravery of brotherhood and the scars war leaves on the societies it ravages. Perhaps most importantly, Elizabeth’s storyline raises a thought provoking reminder of why the Great War should never be forgotten whilst providing a sense of hope and life’s beauty.