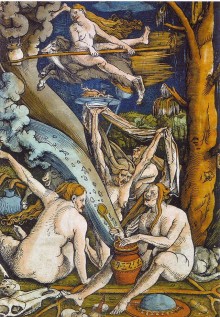 In 1484, Pope Innocent VIII issued the summis desiderantes affectibus, a papal bull that recognised the existence of witches and gave full papal approval to hunt them. In the early modern period, between 40,000 and 50,000 people were accused of being witches, and were executed for their alleged crimes. Coincided with this, early modern Europe in particular gave rise to popular stories and superstition, making people believing in anything from witches to changelings, demons to vampires. As a result, some of the most unimaginable torture devices were created in this era and used on those accused of being heretics. These tales, and events have been passed down through the centuries, changed and skewed, and are seen in many of our modern traditions, Halloween being the most obvious example. These horrifying stories however are not confined to the pre-modern era. Modern history also contains some fearful events that seem unimaginable to the modern mind, for example the Ku Klux Klan’s violent actions again African-Americans, and the less well-known Lebensborn Programme run by the Nazis. This month we set out to explore the truth behind these popular stories and legends, and to uncover how fear has changed and developed through the ages.

But it’s not all doom and gloom, we’ve put in the latest topical issues and the history that goes behind them plus, some cultured history with an exclusive look at Charlie Chaplain, a review of BBC’s new hit TV series Peaky Blinders, and the truth behind the work of Japanese geishas. We’ve also managed to track down Dan Snow, UK’s celebrity historian, for an exclusive interview where he reveals all about his passion for history from his childhood, to his TV work.

In our History You Should Know we have covered a range of topics. Constantinople was once the centre of the known world, the gateway between East and West until 1204 when it was besieged by the 4th crusade and ruined forever. The My Lai Massacre, one of the most iconic events of the Vietnam War saw a village of innocents lay victim to the consequences of war. We’ve also looked at the Taiping rebellion, and the IRA split, history we have all heard of, but don’t necessarily know the ins and outs of.

If you have any suggestions for our next issue please get in contact- manchesterhistorian@gmail.com

We hope you enjoy issue 16!