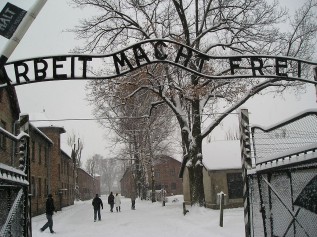 In November 1944, with the Red Army’s march looking more and more unstoppable, Heinrich Himmler ordered gassing operations to cease across the Third Reich. The Sonderkommando (death camp prisoners forced to work in gas chambers) were ordered to remove evidence of any killings and hide all the mass graves within which many victims were buried.  Over 60,000 prisoners were forced to march west from the Auschwitz camp system, on what have been termed ‘death marches’. Thousands had been killed in the camps in the days before these death marches began. These death marches involved tens of thousands of prisoners, mostly Jews, marching to the city of Wodzislaw in the western part of Upper Silesia. SS guards shot anyone who fell behind or could not continue. Prisoners also suffered from cold weather and many starved. More than 15,000 died in the death marches.

Yet these efforts did not stop what happened in these camps leaving a permanent mark on history. Ivan Martynushkin was an officer with the Red Army mortar company and remembers that Auschwitz inmates looked at him ‘with gratitude in their eyes’. But he claimed that neither he nor his fellow Red Army soldiers were unduly moved by what they saw as they had already seen so much horror committed by the Nazis. “I had seen towns being destroyed and the destruction of villages” he said, “I had seen children maimed and the suffering of our own people. There was not one village which had not experienced this horror, this tragedy, and these killings.”

January 27th 2015 marked 70 years since the liberation of the Auschwitz death camp. “I felt such turmoil, such anger seeing this place again” said survivor Susan Pollack on the night of the anniversary. She was sent on one of those final death marches and was found amongst the dead by a medic. The skeletal 14-year old was carried to the ambulance. She recounted the fact a soldier picked her up and carried her to his ambulance as an act of human kindness she had not experienced in some time:  “Someone was actually caring for me again – it still brings out the tears”.

Auschwitz was one of many German concentration camps in which enemies of the Nazi state were sent to live out their final days in forced labour. Out of the estimated 1.1 million victims of Auschwitz, 1 million were Jews and were sent there as part of what Adolf Hitler called his ‘final solution’. During his campaign for power, Hitler told the German people it was the Jews who had held them back, weakened their resolve and cheated their country. They were made the enemies within Germany, and camps such as Auschwitz were designed as a way to cleanse the Third Reich of the Jewish people. Auschwitz was the site of the largest mass murder in history.

The events of Auschwitz teach us a very important lesson about history. Just because it happened before, does not mean it will not happen again. In the words of Michael Rosen:

‘I sometimes fear that people might think that fascism arrives in fancy dress worn by grotesques and monsters as played out in endless re-runs of the Nazis. Fascism arrives as your friend. It will restore your honour, make you feel proud, protect your house, give you a job, clean up the neighbourhood, remind you of how great you once were, clear out the venal and corrupt, remove anything you feel is unlike you. It doesn’t walk in saying “Our programme means militias, mass imprisonments, transportations, war and persecution”.

We must be careful not to look at history through the lens of what has already happened. As awful and tragic as these events were, many atrocities, with the same justifications are currently happening across the world. Boko Haram’s recent actions in Nigeria alongside the horrific acts of Islamic State show us that lessons still have not been learnt from that day in January 1945. In the words of one of the survivors at the 70th anniversary ceremony at Auschwitz a few weeks ago, “Our past must not become the future for our children”; lessons must be learned.

A sneak preview of some of the new work that will be published the in forthcoming issue of @TheMcrHistorian 👇 https://t.co/zGKDwFISPT