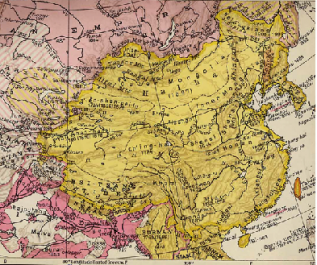 The Qing dynasty was China’s last dynasty, and it lasted from 1644-1912. This period under the Qing dynasty constructed and built upon the foundations for modern China, and its coming to power in 1644 marked the beginning of modern China. However, its demise in 1912 also saw the start of a turbulent modern history.

The Qing dynasty’s eventual rise to power in 1644 was a gradual process that lasted over eighty years. It began with a coalition of peoples called the Manchus (a combination of the Jurchen and the Mongols) who were led by Nurhaci. The taking of Ming cities by the Manchus from 1625 onwards allowed them to gain a foothold into the empire, and would make the transition from Ming to Qing much easier. Furthermore, it also gave them a stable base of power within China, particularly through the capture of Shenyang.

Officers and government workers were implemented into the Ming territories which the Manchus had taken over, thereby making it easier to subdue any discontent felt by the Ming cities. This gradual process of taking over Ming cities and gaining power in Ming territory would become instrumental in making the process of uniting the Ming empire under Qing rule.

The eventual takeover of the Ming dynasty by the Manchus can be argued to have been influenced by external factors. Like previous dynasties, the Ming had fallen due to increased public discontent. A poor economy and various environmental disasters (such as famine) at the end of its reign lead to a people’s revolt. This discontent, plus the invasion of rival forces, led to the storming of Beijing in 1644 which quickly fell to the rebel forces.

There was a struggle between the major Chinese factions, such as the Han and the Manchus, as to whom would take over from the Ming dynasty. This began when the Chongzen Emperor committed suicide due to the fall of Beijing, thus ending the Ming dynasty. There is dispute over the exact details of the rise of the Qing; some accounts state that the Ming themselves asked the Manchus to come to their aid whereas others state that the Manchus defeated Li Zicheng and the rebels took over from him.

The main features of the Qing’s reign at its peak was the lead to a period of stability and prosperity. Under the Qing there was the establishment of modern China’s territorial space, including the territories of Mongolia, Taiwan, and Tibet. Furthermore, the Qing dynasty established another characteristic of modern China: its population size. Over the course of the Qing dynasty, the population nearly tripled in size from 150,000,000 to over 450,000,000.

There was also a resurgence in the arts and sciences; new inventions such as printing productions were made, a new philosophical movement emerged called legalism, and there was an increase in the production of literature (the most famous text would be The Dream of the Red Chamber, published in 1791). Overall, the Qing dynasty saw a rebirth in Chinese culture, and contributed to developing China’s most recognisable geographical characteristics.

However, it can also be argued that the Qing dynasty’s failings and its eventual collapse made more of a profound impact on China’s history. The Qing dynasty failed in foreign relations with the West (Opium Wars 1839-1860) and the Japanese (Sino-Japanese War 1834-5) and its economy eventually became unstable. Most notably, it failed to enact substantial political reform. The reforms that were made eventually lead to the creation of political parties, and thus the rise in political discontent against the dynasty itself. This all culminated in its collapse by the forced abdication of Emperor Xuantong in 1912, thus leading to the creation of a republic headed by the revolutionary Sun Yat Sen.

To conclude, the year 1644 is an important date for modern Chinese history. It saw the beginning of modern China in terms of culture, geography, and politics, and the beginnings of a unified China in its territory and culture.

Don’t forget to check out the latest episode of our weekly podcast!