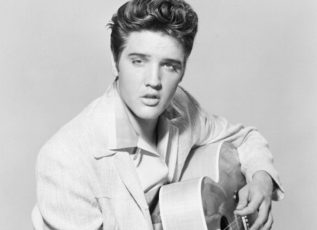 Born on 8 January 1935 in Tupelo, Mississippi, Elvis was born with an identical twin, Jesse, who was delivered stillborn. With no other siblings, Elvis grew a close attachment to his parents who encouraged him to pursue musical inspiration through attending an Assembly of God organisation. As his family relocated to Memphis, Tennessee, Elvis took up the guitar and vocals throughout his teenage years. Upon his graduation in 1953, Elvis had singled out a musical career as his future.

The next three years would prove to be highly significant in Elvis’ life. His releases with Sun Records in 1954 gathered little interest – with his contract sold to RCA Victor the following year. 1956 saw the release of numerous hit singles and the self-titled debut album that launched Elvis’ career. ‘Elvis Presley’ contained hits such as ‘Blue Suede Shoes’, whilst other 1956 singles included the iconic tracks, ‘Heartbreak Hotel’, ‘Hound Dog’ and ‘Love Me Tender’ – all of which shot straight to number one in the US charts. Through his widely acknowledged attractiveness and combination of musical influences, Elvis single-handedly marshalled in a new era of U.S. music and popular culture – breaking down racial barriers and becoming one of the first icons of ‘teenage rebellion’ that was common in the rock and roll era.

Towards the end of his career, Elvis Presley agreed to take part in a TV special that would later be known as the ‘The 1968 Comeback Special’ – where he would play his classic tunes in front of a live studio audience. This PR move was originally designed to salvage his tarnished reputation he gained through his film career in the 1960s. Instead, it helped propel him to the status of one of the greatest solo musical artist of his generation, and possibly of all-time.

His death in 1977 from prescription drug abuse ended years of medical deterioration yet sealed the rock star’s legendary status. With twenty studio albums and thirty- three number one hits, the ‘King of Rock and Roll’ remains to this day the best-selling solo artist of all time.

The now-iconic singer was perhaps not always destined for greatness though. During his school years Elvis had been somewhat of an outcast, seeking solace in solitude and music. Perhaps surprisingly, Elvis had to overcome stage fright during his childhood – with his confidence knocked following his teacher’s assertions that he was just ‘average’. Aged 14, a young Elvis was told by his high school teacher that he had no aptitude for music and that: ‘not many would ever appreciate him for his singing’. The rest is, as they say, history.