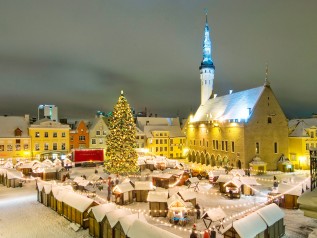 It’s that time of the year again. The nights are drawing in, the songs are playing on the radio, the trees are being decorated and Manchester’s infamous Christmas Markets are in town once again. A staple of the Mancunian festive calendar since 1999, the various stalls and bars always provide a way to get into the Christmas spirit. But where did they begin?
Perhaps unsurprisingly, the idea for them didn’t originate from Northern England, and the earliest known mentions of Christmas markets date back to Bautzen (1384), Frankfurt (1393), Munich (1310) and the Vienna “December market” which was forerunner of the Christmas markets dating back to 1294.One of the most famous markets is held in the city of Dresden in Germany. Celebrating its 580th birthday in 2014, the Striezlmarkt was first held the Monday before Christmas in 1434.

The name Striezlmarktcomes from Strüzel, meaning Stollen – a now infamous light airy fruitcake low in sugar that is still sold on the stalls of Albert Square to this very day. It still can’t beat the Dresden Stollen, which is distinguished by a special seal depicting the city’s famous king, August the Strong. The shape of the cake is reminiscent of the entrance of a mining tunnel, reflecting Dresden’s rich silver and tin mining history. In many towns in Germany and Austria, Advent is usually ushered in with the opening of the Christmas market or “Weihnachtsmarkt”. Generally held in the town square, on opening nights onlookers welcome the “Christkind” – originally a boy Jesus but often depicted as an angel-like girl – acted out by a local child.
The typical Christmas market included a nativity scene, Zwetschgenmannle(figures made of decorated dried plums), Nussknacker(carved Nutcrackers), traditional Christmas cookies such as Lebkuchenand Magenbrot(both forms of soft gingerbread), and the infamous hot mulled wine which traditionally sometimes included a shot of brandy to warm up visitors to the markets on cold winter nights.
The modern day market has spread like wildfire. The 1982 Lincoln annual Christmas market has become the most extensive in the United Kingdom, whilst three and a half million visitors head to the 300 stalls of Dortmund in Germany each year. In 2007 a new twist on the market began in Sibiu, Romania, inspired by the traditional Viennese Christmas markets – a project developed by the Social Attache of the Austrian Embassy in Romania. The Sibiu markets show that despite their age, the festive market is still continuing to warm the hearts of their many visitors, over 500 years later.