Do Monarchs possess unique,supreme powers compared to ordinary human beings? Does being a King or Queen enable one to perform extraordinary and supernatural acts in order to benefit subjects? Although these questions may seem absurd when examining modern Kings and Queens, in the past, the idea that aMonarch had supernatural abilities was very common and known as the Divine Right of a King, or the ‘Royal Touch’. Essentially, the Divine Right of a King is the belief that the monarch derives their right to rule directly from God and therefore is subject to no earthly authority.This means that the King is not compelled to the wills of his people, aristocrats or even the Church. According to this belief,only God can judge the King and if any person was to deem the King unjust,he was accused of disobeying the will of God. 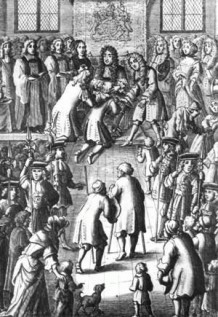 From the Doctrine of the Divine Right came the practice of the ‘Royal Touch’; a supernatural healing practice performed by English Kings and Queens on their ill subjects inan attempt to cure them of their illness. A ceremony was held in which the monarch touched his subject by placing his hands on their face with the intention of curing them of any illness or disease they possess. The Royal Touch was particularly used to cure the illness known as Scrofula or the ‘King’s Evil’; this disease rarely resulted in death and often went into remission on its own, giving the impression that the Monarch had cured it. The Royal Touch was a hugely popular ceremony amongst Englishmen with sometimes as many as six hundred ill people being cured in one session. So why, during the medieval years, did this supernatural form of curing become so popular to Englishmen and their monarchs?

The theory of the Divine Right hit the height of its popularity at a time when people were most impressionable; before the Glorious Revolution in 1688 and before the American and French revolutions later on in the seventeenth century.The lack of accurate medical and technological knowledge at the time meant that religion played an integral role in many people’s lives; the theory of the Divine Right of a King was very plausible to most people and also gave them hope. Historians have often discussed possible andcontroversial reasons as to why the practice of the Royal Touch was popular withmonarchs themselves.Many historians openly argue that some Monarchs use of the Royal Touch was purely to correct and strengthen the relationship between themselves and their subjects. The ceremony had the impact of increasing respect and loyalty shown towards the King; magnifying his power and therefore bringing him personal gains in the form of increased political power. It is interesting to look at the personal and political circumstances of various English monarchs who performed theRoyal Touchin order to discover if there is a positive correlation between those who used the Royal Touch and those who needed to increase support and power.

Charles II is a prime example of a monarch who perhaps used the Royal Touch to achieve personal gains. Charles faced various problems including numerous religious and political divisions among his subjects in England, outbreak of war with the Dutch and the widespread epidemic of bubonic plague, the Royal Touch was a perfect distraction for Charles to prove his power and authority to his people. It seemed like a clever belief for a monarch to adopt and in Charles II case, a necessary form of gaining support from your subjects.

The origins of the Divine Rights of Kings are rooted in the medieval idea that God had bestowed earthly power on the King, in the same way that God had given spiritual power and authority to the church, through the Pope. In England, records of the Royal Touch date back since the 12th century though it became most known under the reign of James I of England who reigned in the early seventeenth century. However, the theory of Divine Right was then abandoned in England during the Glorious Revolution of 1688–89. Advances in science and technology in the late eighteenth century greatly weakened the theory’s appeal;people were moving away from supernatural beliefs and turning to more natural ideas about the world. By the early twentieth century, the Divine Righthad been virtually abandoned.

Need some help from our school ❓❔