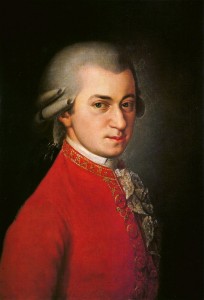 “A world that has produced a Mozart is a world worth saving” was the grand declaration of Franz Schubert, and it is true that Wolfgang Amadeus Mozart made his mark on history in a way that few other composers have equalled.

By any measure, Mozart stands as one of the greatest musical composers of all time, perhaps unsurprising from a man who apparently learned to write music notes before he could write words. Born in Austria in 1756, his talent was recognised early on, and before he was out of his teenage years he had already become a highly respected pianist by the nobility of Germany, France and Italy. A papal knighthood and appointment as a court musician by the ruler of Salzburg, Prince-Archbishop Hieronymus Colloredo, followed this success.

But Mozart did not become one of the most prolific composers in Europe, with over 600 categorised works, and more besides, by settling into a comfortable (albeit poorly paid) position. In 1777, after four years at court, he set off travelling again, first to Paris and then, in 1781, to Vienna. All the while he composed at a furious rate, often with no amendments to the first written drafts that he produced during his travels. The concerts he staged were met with great acclaim, and when he turned his attentions to opera in 1786, he produced the celebrated Don Giovanni. Indeed, the range of his work was another feature of Mozart’s genius: from operas to violin sonatas, with a couple of horn concerti thrown in for good measure, he tackled a broad spectrum of music and succeeded in all.

Yet for all his success, Mozart was never truly wealthy. He spent rather irresponsibly during his earlier years, saving little. And after the Austro-Turkish War began in 1786, his financial situation deteriorated rapidly, and he was forced to borrow money. These monetary woes forced him into long tours around German cities in a search for further fortune, with little success and further detrimental effect on his fragile health, which had never recovered from the difficult conditions of his earliest European tours with his family. No amount of personal prestige could persuade the Austrian nobility, many of whom were already squeezed by the cost of the war with the Ottomans, to support him sufficiently.

As he entered what was to be the final year of his life, in 1791, Mozart’s finances improved, and his productivity increased. So too did the range of expression in his music, outstripping the usual boundaries of the classical genre. But for his death at the end of the year, of suspected acute rheumatic fever (although ambiguity surrounding the true cause has given conspiracy theorists ample material), he could have perhaps reached even greater heights, depths and subtleties in his compositions. Yet there is a bitter poeticism to the idea that while his travels as a young boy – during which time he absorbed the influences of countless other composers including Bach – moulded him into one of the great composers, they also sowed the seeds which would cut this talent down early.

Nonetheless, his legacy remains one of the most enduring of all composers. Though the names may be unfamiliar to many, works like Eine kleine Nachtmusik and the third movement of Piano Sonata No. 11 in A major are still some of the most distinctive pieces of music ever written. His influence was felt by Beethoven, who travelled to Vienna in 1787 in the hope of meeting Mozart, and composers ever since. And though the title “musical Christ”, as Tchaikovsky once remarked regarding him, may be debatable, there is no doubt that he was a musical genius, and one of the greatest composers who ever lived.