Witchcraft was something which expanded greatly during the medieval period, particularly from the onset of the fifteenth century. It had been developed from a long tradition of ecclesiastical and secular persecution of the practice of illicit magic, an act deemed wildly heretical. However, by the 1400s a much more extreme and sinister conception of witchcraft had emerged, with one core element being the ritual gathering of witches at the Sabbath. 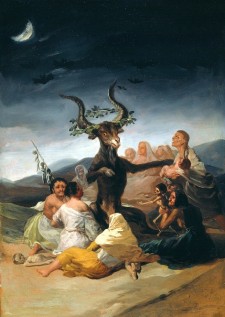 An understanding of the existence and reality of the Sabbath grew rapidly in the fifteenth century due to its wide appearance in a multitude of contemporary texts. These accounts were almost identical in their perception, speaking of a ritualistic and sinister gathering of witches in remote locations. Sabbath witches were summoned to attend a ceremony where Satan himself and other demons would be present in human or animal form. Each witch was required to profess their undying loyalty and service to the Devil and make a full renunciation and rejection of the Christian faith in return for being taught the ‘black arts’.In addition, Sabbath proceedings would involve the non-discriminatory sexual affairs of the witches, most of whom were female, with the Devil and his demons as they were engaged in a sinister relationship which consumed their body and their soul. The result of such ceremonies would train the witches to inflict harm on others by using the magical arts, such as inflicting infertility and sterilization, summoning storms and hail, and invoking pestilence.

Sacrifice became one of the core elements of the witches’ Sabbath initially through a sacrificial offering of the witches own body and soul to the Devil, forever. A witch would swear total allegiance to Satan, in addition to the offering of one limb after death, in return for the knowledge and ability to practice the dark magical arts.

The sacrifice of infants was also a common theme of the Sabbath; babies were murdered, abducted and consumed in the name of Satan as a way to pledge allegiance. According to the account of Johannes Nider in his Formicarius, one witch at Bern admitted to the sacrifice of thirteen babies. A ritualistic killing was made, where the remains of the baby were then added to a witches’ broth. The contents would be boiled to separate flesh from bone, where the solid matter would be used for the purposes of practicing rites and transmutations. Liquid remains were put in to flasks made from human skin, to be drunk as a pledge of allegiance to the Devil. Consumers of this liquid matter would absorb the knowledge of the black arts.

Curses were also supposedly used as a method to induce death. The witch Stedelen of Lausanne confessed to the killing of seven unborn babies while in the womb of the mother in a particular house at his trial. His curse inflicted abortion on all pregnancies for numerous years, even stopping the reproduction of livestock. He claimed to have imposed this curse by placing a lizard underneath the front entrance of the house. Upon discovering this, the alleged lizard was not found for having turned to dust, but when all of the dirt underneath the front entrance was removed fertility miraculously returned to the household.

The publication of the Malleus Maleficarum, a witch-hunting manual,in 1435 cemented the medieval reality of witchcraft and the existence of the Sabbath. Written by theologians and inquisitors Kramer and Sprenger who dealt with the persecution of witches, it speaks of them as the most evil and vile form of magic and superstition. They were sinister individuals who had rejected the Catholic faith in the name of the Devil and embarked on a quest to instill horror unto others. The witches who gathered at the Sabbath were amongst the most powerful class of witches, known for their dark magical ways of inflicting harm and their ritual sacrifice of children.

Although modern interpretations may view witchcraft merely as a supernatural phenomenon, it was very much a real and legitimate source of fear and controversy in the Middle-Ages. Contemporary sources detail multiple accounts of witches and their gatherings at the Sabbath, demonstrating their legitimacy in an age with a firm belief in the arts of magic and sorcery. While some view this spectacle as an attempt of authorities to rationalize heretical matters they could not comprehend, in the age of witchcraft there was a very genuine and widespread understanding of magical practice and the Sabbath.