This article will feature in Issue 38: Language and Culture 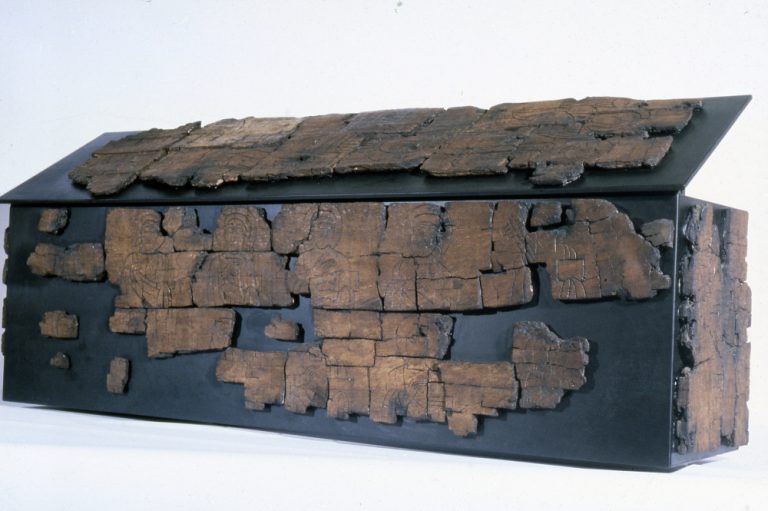 At what point does a coffin become a reliquary?

In 698 A.D., eleven years after his death, St Cuthbert’s body was exhumed and found to be incorrupt. Removed from its subterranean stone sarcophagus in St Peter’s Church, on the monastery island of Lindisfarne, the body was then transferred into a new oak coffin and placed above ground next to the altar. Almost 200 years later, in 875 A.D., this coffin was evacuated from Lindisfarne and for seven years carried across Northumbria by monks evading Danish armies.

Both while on Lindisfarne and during its seven-year pilgrimage, Cuthbert’s coffin functioned not just as a casket, but also as a reliquary: a container for relics, designed to be a focal point for religious devotion. Usually, reliquaries only contain a small object associated with a saint, such as partial physical remains or personal effects. These reliquaries are often small, sometimes portable, and in Christian practices can be richly decorated. But coffins are rarely considered to be reliquaries – likely because they are not usually displayed or worshipped in the same manner.

Cuthbert’s oak coffin, however, was publicly venerated, associated with miracles, taken on an (albeit involuntary) pilgrimage, and decorated with religious iconography. It was intended to be an object for worship – to perform the same function as a reliquary. According to Bede’s prose Life of St Cuthbert, the monks had

‘a wish to remove his bones, which they expected to find dry and free from his decayed flesh, and to put them in a small coffer, on the same spot, above the ground, as objects of veneration to the people.’

Even before they discovered the miracle of his incorruption, the community therefore intended to salvage Cuthbert’s remains and to revere them as holy relics. Bede’s Life also shows that the new coffin was constructed for this purpose before the exhumation, as Bishop Eadberht ordered the monks to place his body “in the chest which you have prepared” (Chapter XLII). This detail is not present in the earlier anonymous Life, but it suggests that the coffin itself was intentionally designed to be viewed and worshipped. If this is the case, then it fulfils the same purpose as other medieval reliquaries.

Each surface of the coffin’s exterior is inscribed with images of evangelists, angels, apostles, and the Virgin and Child. It may not be richly decorated (it is instead limited to simple, unpainted carvings) but this is not a surprise for a man such as Cuthbert who led an ascetic life as a monk and hermit. But crucially, these images are accompanied by text in both runic and roman alphabets, which label the images. The different types of text can potentially illuminate different forms of interaction with the coffin – from its initial construction to subsequent veneration.

All the archangels and apostles are labelled in Roman script, as are the Virgin Mary and the evangelist Luke. The remaining three evangelists (Matthew, Mark, and John) are labelled with runes, as is Christ, written as the Chi Rho ‘ᛁᚻᛋ ᛉᛈᛋ’ (IHS XPS). The key question is – why the variation in script?

There are several possible theories, none of which can be confirmed with any certainty but all of which are worth considering. The use of runes may well be due to construction practicalities: runes are far easier to carve than their curved roman equivalents, and they are surprisingly common in early medieval inscriptions, particularly in Northumbria. The carver clearly struggles with curved lettering – the letter <O> is often nearly hexagonal! – yet curves are possible, as the inscriber of the figures manages this feat in their halos, eyes, and wings. It is entirely feasible that the coffin was simply carved by multiple workmen who used different scripts, and the variation has no symbolic function or devotional purpose.

However, regardless of intention, the different scripts have different resultant effects. If we consider potential symbolic meanings, then the fact that it is only three evangelists and Christ who are labelled in runes may indicate their particularly important or spiritual status. The exception of Luke, the only evangelist who is labelled in roman script, could also reflect the way in which he was known for his scholarliness and literacy, as he was a Greek physician and is the patron saint of students and surgeons. Variations in text – whether it’s script, size, or position – all direct a viewer’s focus towards specific areas of the coffin and prompt contemplation of their religious significance. 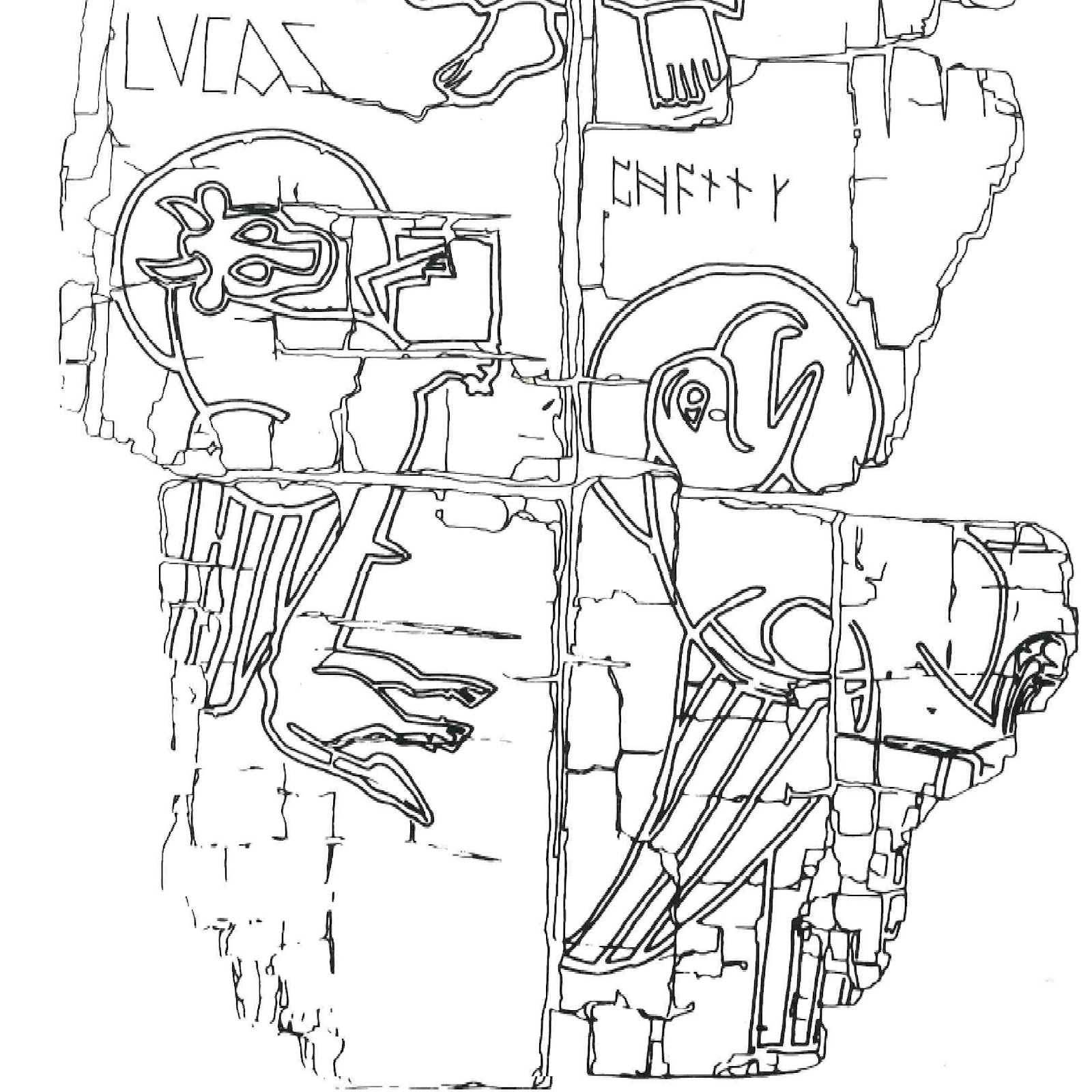 Finally, it is worth noting that, for an artefact designed to be revered by monks and pilgrims alike, the text on the coffin is surprisingly faint and indiscernible from a distance. There are suggestions that the labels were lightly incised before then being carved with a heavier hand, which may suggest that they could have initially been a construction aid, with no intention to keep them in the finished work.

The coffin survives today and is now on permanent display at Durham Cathedral. Despite no longer holding Cuthbert’s remains – which are instead buried nearby, behind the cathedral’s altar – it is still a rare example of a medieval portable reliquary. As a focaliser for devotional practice, it is certainly worth considering St Cuthbert’s coffin in the context of other reliquaries from early medieval Europe.

Images courtesy of the Dean and Chapter of Durham Cathedral, J.M. Cronyn, and C.V. Horie.