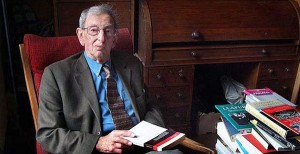 The Marxist economic historian Eric Hobsbawm, who has died aged 95, was regarded internationally as one of most the prominent British historians, his works being number one on the reading list for every student with an interest in modern history.

Born in 1917, Hobsbawm grew up in Egypt, Vienna and Berlin, where he witnessed the collapse of the global economy and Hitler’s rise to power. He left Germany for England in 1933, the year Hitler became Chancellor, and received his PhD in History from King’s College, Cambridge, before serving in the Royal Engineers and the Royal Army Educational Corps. It was at Cambridge that he joined the Communist Party, a political affiliation that saw him held back from many positions, both during the Second World War and in his later search for a teaching position.

His works are today amongst the most widely read and respected of any modern historian. He never attempted to hide or deny his left-wing political views, a brave feat during the Cold War fears of the 1950s and 60s. His commitment to Marxist ideology meant that in a BBC interview in 1994, he controversial stated that the millions of lives lost under Stalin’s rule would have been justified, had a Communist society been a true success.

Despite this, Hobsbawm was widely respected by historians from both ends of the political spectrum, and he was almost always successful in producing work unprejudiced by his own beliefs. He was not dogmatic.

Hobsbawm’s Marxist views were imperceptible in the first three “The Age of…” books. However, in the coda of The Age of Extremes, about the ‘long nineteenth century’, the failures of the Soviet Union forced Hobsbawm into an uncomfortable position. He wanted neither to fully reject his communist ideologies, nor to produce a biased piece of work. Unlike most of his Marxist contemporaries, Hobsbawm never fully turned his back on his beliefs as he grew older. He grew slightly quieter on the subject in the 1990s, when he did not renew his Communist Party membership, but still remained loyal to his lifelong political views.

Hobsbawm established labour history as an important academic branch of history. In studying protest and the people’s movement from a socialist perspective, he legitimised academic studies that focussed on the people themselves, rendering his work accessible and relevant, especially for the student population. Along with other communist historians, Hobsbawm created the journal Past and Present, now a highly-esteemed journal often listed as required reading by the Manchester History department.

Regardless of Hobsbawm’s political views, he will remain the one of the most important historians in any modern history student’s studies. Following Hobsbawm’s death, Niall Ferguson said “at a time when much smaller ideological differences are regularly the occasion for vituperative ad hominem attacks, Hobsbawm should serve as an example of how civilised people can differ about big questions while agreeing about much else.”

It is this, perhaps, that will be his greatest legacy: uniting historians with polar-opposite beliefs through the academic study of history.